In 1939, a ship carrying raw uranium ore from the Belgian Congo steamed into New York Harbor. It bore left around Staten Island into the Kill van Kull and docked under the Bayonne Bridge. The radioactive ore was stored in a warehouse owned by the Archer Daniels Midland company. Few people other than NYC Mayor Fiorello LaGuardia knew it was there. Not even the Staten Island Borough President was included in the plan. 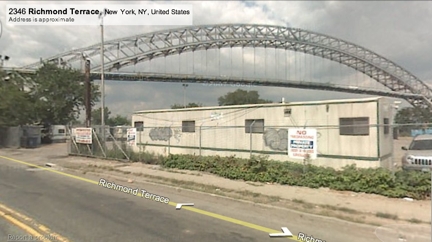 This current-day picture of the site was captured online using Google Maps.
The map above it shows the location of the site (small, red balloon at lower left) in the context of New York Harbor.

The uranium eventually was sent by train across the United States, destined for scientists developing the world's first atomic bomb in Los Alamos, New Mexico. At some point, however, either when it was being brought into or out of the Staten Island warehouse, uranium was spilled.

Through the years, the site, which was never remediated, remained industrial. The link to the Manhattan Project was no more than urban legend until 1980, when the site was tested for radioactivity by representatives from the Oak Ridge National Laboratory, a Tennessee facility established as part of the Manhattan Project. The tests proved positive, but the report was swallowed by the U.S. Dept. of Energy, once known as the Atomic Energy Commission.

In 1999, the site across the street from the radioactive area was purchased by developers who wanted to rezone it as residential. As part of the rezoning, community members participated in the City's Uniform Land Use Review Process — and the myth of the Manhattan Project was retold. That's when Beryl Thurman, president and executive director of the North Shore Waterfront Conservancy, first heard about it. Then the president of the Port Richmond Civic Association, she was questioning the wisdom of building hundreds of new homes without more school seats. Radioactivity, however, was far more serious. Concerned, she decided to get to the bottom of the story, requesting details about the site from the Dept. of Energy under the Freedom of Information Act. “It became crucial that more historic information was needed regarding this property,” Ms. Thurman writes in a recent report about the borough's contaminated waterfront. In 2001, the Dept. of Energy faxed Ms. Thurman the Oak Ridge report.

This current-day bird's eye view of the site was captured from
the Environmental Protection Agency web site. The EPA refers
to the site now as the Richmond Terrace Radiological Site. 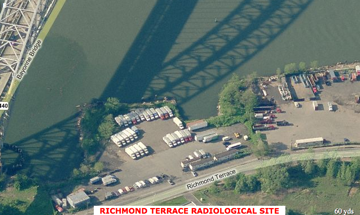 The government rejected responsibility to include the site in a federal remediation program because it was privately owned during the time of the uranium storage.

According to a story published last year in Gotham Gazette, the NY State Dept. of Environmental Conservation found high levels of radiation at the site in 1992 but no action was taken. In 2008, at the request of local residents, officials from the Environmental Protection Agency, DEC and NYC Dept. of Health conducted yet another assessment and found dangerous radiation levels.

At this point, the EPA asked the Dept. of Energy to reevaluate its position on remediation of the site.

On Thursday, January 7, 2010, representatives from the Environmental Protection Agency told Ms. Thurman that the US Army Corps of Engineers would assess the extent of radioactivity, and then proceed with a clean-up. Site assessments began last month.

Ms. Thurman is suggesting phone calls, letters and email to the office of Congressman Michael E. McMahon, who represents Staten Island, “to make sure that sufficient funding to the US Army Corps of Engineers is made available for the proper clean up and disposal of all radioactive materials from this site and if need be the Kill Van Kull.”

She is pleased at the outcome of many years of advocacy, but points out that this is just one of many contaminated sites along Staten Island's North Shore. Selected as one of EPA's Environmental Justice Communities last November, the North Shore area received a $100,000 commitment to be used to develop a community-based health strategy. The award specifically mentioned dangerously high lead levels associated with a waterfront area just down the road from the Archer Daniels Midland/Manhattan Project site. This particular site was most recently occupied by a Sedutto's Ice Cream Factory, but before that, for more than 100 years and reaching back into the 19th century, it was home to National Lead Industries.

Responding to the EPA award last November, Ms. Thurman said, “These are waterfront communities and their history and their sense of who they are, is connected to their waterfront. NSWCSI is here to help rebuild that sense of community and with the help of the EPA and officials to eliminate as much of the toxins as we can from our environment. It is essential to make Staten Island's north shore environmental justice communities, waterfront and surrounding waterways clean, safe and healthy for residents.”