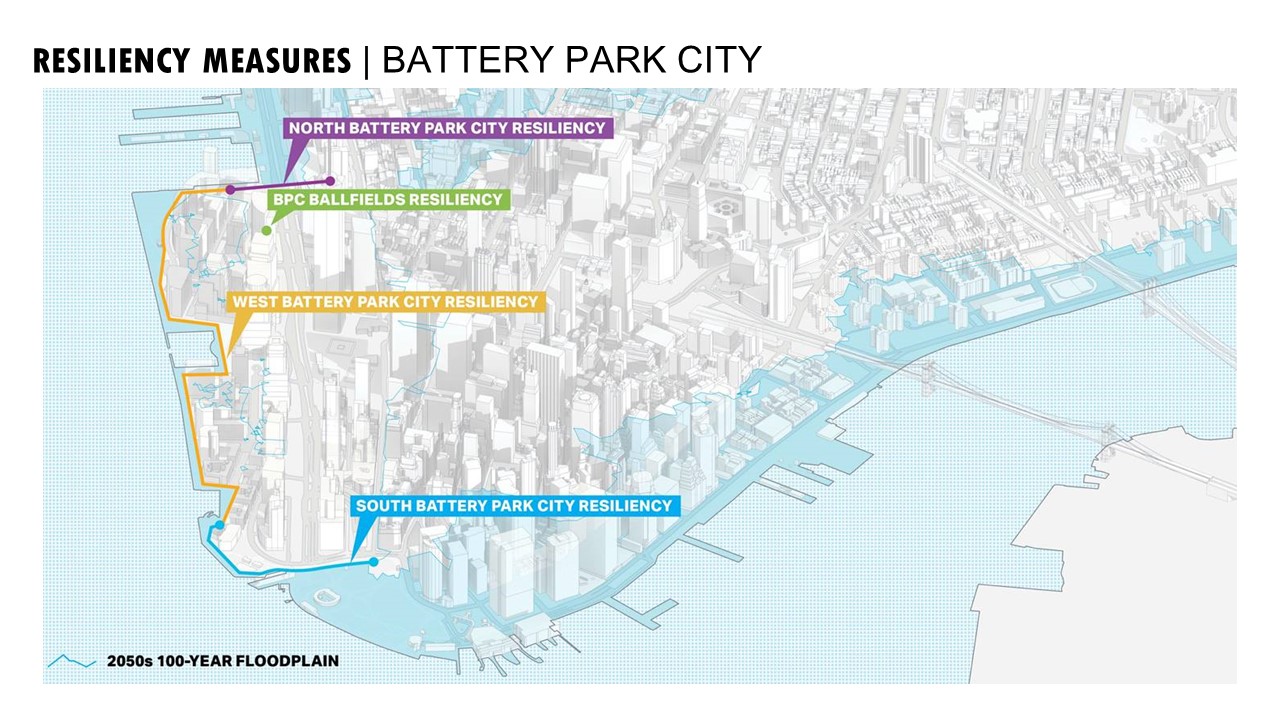 This case study of one urban coastal community’s preparation for sea level rise and storm surge is the first in a multi-part WaterWire series on resilience planning. The second part will widen in scope to look at resilience plans for all Lower Manhattan neighborhoods and how they work together, and a third part will discuss how—and if—these plans can be a model for the New York City and the region.

Around 1970, when a new waterfront neighborhood in Lower Manhattan was being planned, designers and engineers weren’t thinking about the future impacts of climate change and the possibility that Battery Park City could be inundated by rising waters.

Fifty years later, with the climate crisis and its impacts undeniable, executives at the Battery Park City Authority (BPCA)— the state agency that governs the 92-acre neighborhood on the Hudson River—are setting into motion long–term plans to protect Battery Park City from rising waters. Guided by statistics for a 100-year storm surge in 2050, the BPCA is currently developing three flood protection projects designed to protect the entire neighborhood. The budget for comprehensive protection for this one coastal community? “The total price tag is in the neighborhood of $500 million,” said Gwen Dawson, BPCA vice president for real property.

Is this money guaranteed? Because BPCA is able to raise funds by issuing its own bonds, the organization’s president BJ Jones is confident that the funds will be available and the projects will go forward. “We require approval from the City of New York on our capital plan and financing, so, as our plan evolves, we do need to work with the City to obtain the necessary approvals,” he explained. But, “even in the midst of this economic uncertainty that we’re facing, resiliency certainly remains a priority for us and for the City as well. The financial picture doesn’t change the threat that we’re facing.”

Concern for their neighbors often prompts community members to inquire how BPCA is working with people on the other side of its proposed barriers.

“I’ve been worried about Tribeca for some time,” Bob Schneck, a Battery Park City resident and Community Board 1 member, told the BPCA resilience team at a public meeting a few weeks ago. The team had just described how the future wall along Route 9A, connected to gates spanning the highway, would stop water from flowing south and into Battery Park City. Mr. Schneck thought about where surging water might go. “Is it possible to extend the wall to protect Tribeca, too?” he asked.

The Need for Broader Resiliency

“There’s definitely a need [for resilience planning] throughout Tribeca,” Ms. Dawson told WaterWire later. “What we’ve attempted to do is offer a design that can be extended. We understand that this is something the city is looking at and will be at some point making a proposal to do and hopefully we can provide something to use as a starting point.”

“Once there is a barrier, there’s a wet side and there’s a dry side,” she acknowledged. “It underscores the fact that, yes, there need to be additional measures advanced by others to address the needs of those extended communities.”

While Battery Park City’s half–billion–dollar resilience plans will result in flood protection for parts of Lower Manhattan outside the Battery Park City border, there will always be an uncomfortable boundary line. The BPCA’s resilience work, however, comprises a significant portion of the overall Lower Manhattan Coastal Resiliency Project and the BPCA team is working with planners on all sides to create smoothly interconnected flood protection that benefits the area as a whole. “Like everything with resiliency, there are a lot of stakeholders involved,” said BPCA president BJ Jones. How many different Lower Manhattan resilience projects are there? How do they fit together? And what happens when a community doesn’t have the same financial resources as Battery Park City? Read part two of the series in the next edition of WaterWire or follow the link here.

“When you’re talking about resiliency, you’re talking about water, and—just like when you’re talking about air—you can’t totally isolate yourself,” Ms. Dawson said. “You can create measures that have their own independent utility, but ultimately, all of those individual efforts are much stronger and much more long–lasting and effective when they can be connected with broader resiliency efforts. So that’s our goal: to create measures that will offer protection for Battery Park City, and that ultimately have the capability of being connected to a larger resiliency network and system that will be better in the long run for everybody.”