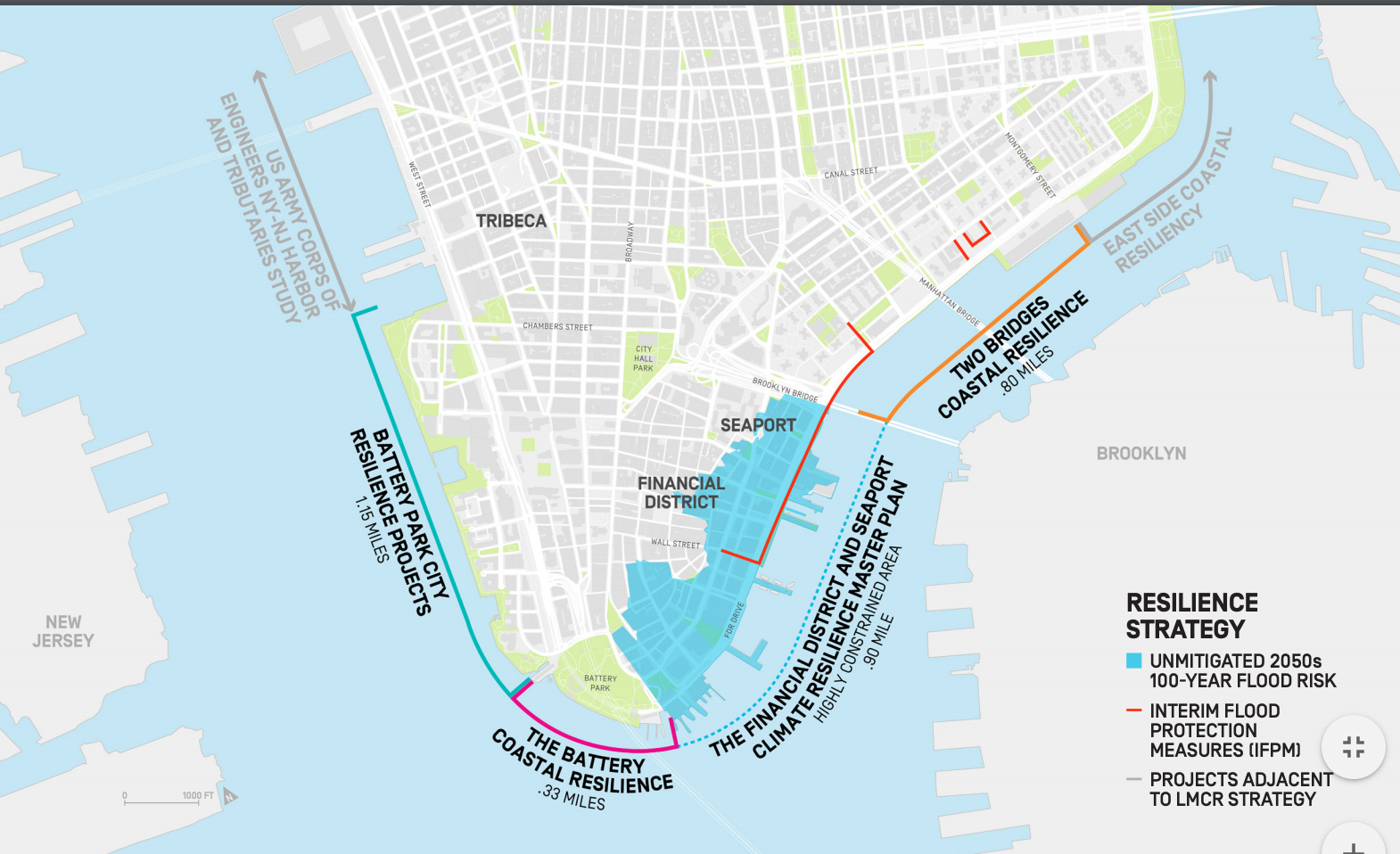 Ripples of Resilience is a multi-part WaterWire series about urban strategies for flood protection. In the first part, we learned about the Battery Park City Authority’s coastal resilience plans. All flood protection projects in this Lower Manhattan neighborhood should be completed by 2025, including proposals to elevate waterfront parkland, build temporary and permanent flood walls, and install flood gates. The total price tag is around $500 million, to be paid for with bonds issued by the BPCA and approved by the City of New York.

In part two, we take a wider look at resilience in Lower Manhattan, one of the most densely populated parts of the world, surrounded on three sides by water. Studies show that within three decades, 37 percent of Lower Manhattan properties will be at risk in a 100-year storm surge. Battery Park City’s plans are one component of the five-part City Lower Manhattan Climate Resiliency (LMCR) project, which stretches up the East River to Montgomery Street. From Montgomery Street to 25th Street, flood protection initiatives are part of the East Side Coastal Resiliency (ESCR) project.

How do Battery Park City’s flood protection plans dovetail with those of other Lower Manhattan neighborhoods? It’s complicated. Coastal resilience is the common goal, of course, but, as Jainey Bavishi, director of the Mayor’s Office of Resiliency, said at a public meeting about Lower Manhattan resilience, “It’s important to remember that there’s no one-size-fits-all solution here. We’re taking a tailored approach to each neighborhood.” Designs are complex, using evolving technology; collaboration must span multiple organizations and agencies.

Eighteen months ago, the City launched the LMCR with the release of the Lower Manhattan Climate Resilience Study, and set aside $500 million for capital projects and additional studies for the waterfront from The Battery to Montgomery Street. According to the City’s estimates, the total cost of the LMCR plan could reach $10 billion. The source of much of this funding, however, is unknown. Buoyed by the victory of Joe Biden in this year’s presidential election, environmental advocates and urban planners in New York and beyond are daring to hope for an influx of federal dollars next year.

Federal funds are what got the Lower Manhattan coastal protection projects (and others) started a few years ago. The LMCR and the ESCR are descendants of the original Big U plan, one of the winners of the Rebuild By Design federal competition after Hurricane Sandy roared up the East Coast in 2012. In total, $511 million in federal funding was granted to BIG U projects. In a complication that concerns some onlookers, $335 million of that needs to be spent by September 30, 2022, or it could be retracted.

How to Protect Lower Manhattan?

Ms. Bavishi offered LMCR updates in “A Community Wide Discussion on the Progress of the Big U,” an online discussion about Lower Manhattan resilience on October 28, hosted by Rebuild By Design:

Montgomery Street, where the LMCR meets the ESCR, is a high point on Manhattan’s east side coastline. Going north, the $1.45 billion ESCR plan will install floodwalls and floodgates along the coastline, raise the bulkhead, replace bridges, and use landfill to raise East River parkland by eight feet. Construction began last month and will continue through 2025. The plan is fully funded with $338 million in federal money and the rest from the City of New York.

The ESCR plan is controversial. Scores of Lower East Side community members spent nearly five years working with City agency representatives on how best to protect the area from rising waters. However, after a project review in September 2018, City officials revealed a very different design, one that met flood protection goals more quickly. To this day, community members feel their time was wasted and criticize parts of the new design, including the plan to bury East River Park under landfill and destroy hundreds of mature trees. The new ESCR design does not entail closing any part of the FDR Drive, and adds another $700 million to the total cost.

In November 2019, the New York City Council voted to approve the new ESCR plan, with 46 members voting in favor and one abstention. The plan was also approved by New York City’s Public Design Commission.

“This made people upset, to say the least, and it put us back quite a bit in terms of the environmental impact statement and the ULURP,” said Trever Holland, chair of Manhattan Community Board 3’s Parks, Recreation, Waterfront, and Resiliency Committee, referring to the new ESCR plan and New York City’s land-use processes. He was a featured speaker in the online discussion on October 28 about Lower Manhattan resilience.

Amy Chester, managing director of Rebuild By Design, followed Mr. Holland with an optimistic perspective. “The City has learned so much in the past few years about implementation of resilience plans, and they are working much faster now on Lower Manhattan projects,” she said.

Earlier this week, Ms. Bavishi told WaterWire, “the East Side Coastal Resiliency project is among the most ambitious and most technically complex resiliency projects anywhere in the world. Projects of this magnitude require extensive coordination with State and Federal governments, the involvement of multiple City agencies, and lengthy environmental review and regulatory processes. We have learned an enormous amount about how to navigate these complexities and have already begun applying these learnings to other coastal resiliency projects in New York City. We’re also routinely called upon to share our expertise with other global cities that are seeking to design similarly ambitious projects.”

“The ESCR is still painful,” Mr. Holland said. “But it is a necessary pain for a project of this magnitude.”

Feedback from the Community to New York City

On October 28, more than 400 viewers from around the world watched the online discussion about progress on Lower Manhattan resilience efforts. After Ms. Chester acknowledged the alphabet soup of agencies involved and Ms. Bavishi gave the City’s update, leaders from community boards impacted by Big U projects talked about their coastal neighborhoods, and their concerns.

“Trying to understand who was in charge has been an issue,” Mr. Holland, from CB3, noted.

“The community questions how one area’s proposed protection measures affect another,” said Alice Blank from CB1, referring to “inexplicable inconsistencies.” For example, she said, Pier A is located at one of the neighborhood’s low points, and has been rehabilitated to accept rising and receding waters, “yet we are told that the adjacent park must be rebuilt at a much higher elevation.”

Mr. Holland brought up funding concerns. “Everything revolves around funding, and COVID changed everything for us,” he said, referring to this year’s proposed $3 billion Restore Mother Nature Bond Act that was postponed by Governor Cuomo. “I just don’t know if we’re going to be able to move this any further if we don’t get some type of federal funding.”

As the Battery Park City Authority charges ahead with its resilience projects on the west side of Lower Manhattan, aiming to have the entire neighborhood protected within five years, challenges remain for east side resilience; in particular, identifying funding sources for all of the LMCR projects.

Much will depend on the Biden Administration’s decisions on federal aid.

Meanwhile, insight into best practices is growing and technology is evolving. “Resilience is an emerging field,” Ms. Bavishi said October 28. “We want to continue to share lessons learned, empower communities with an understanding of climate risk and technical feasibility, and then share best practices and visions for the future.”

“We are grateful for what the City is trying to do,” Ms. Blank said at the same event, “and grateful to be more fully engaged in the process.”

Thanks for reading the second installment of Ripples of Resilience! In the third part, we’ll talk to experts about how—and if—these developing, multi-faceted resilience plans can be a model for greater New York City, the region, and beyond. Stay tuned for a good discussion with the experts!