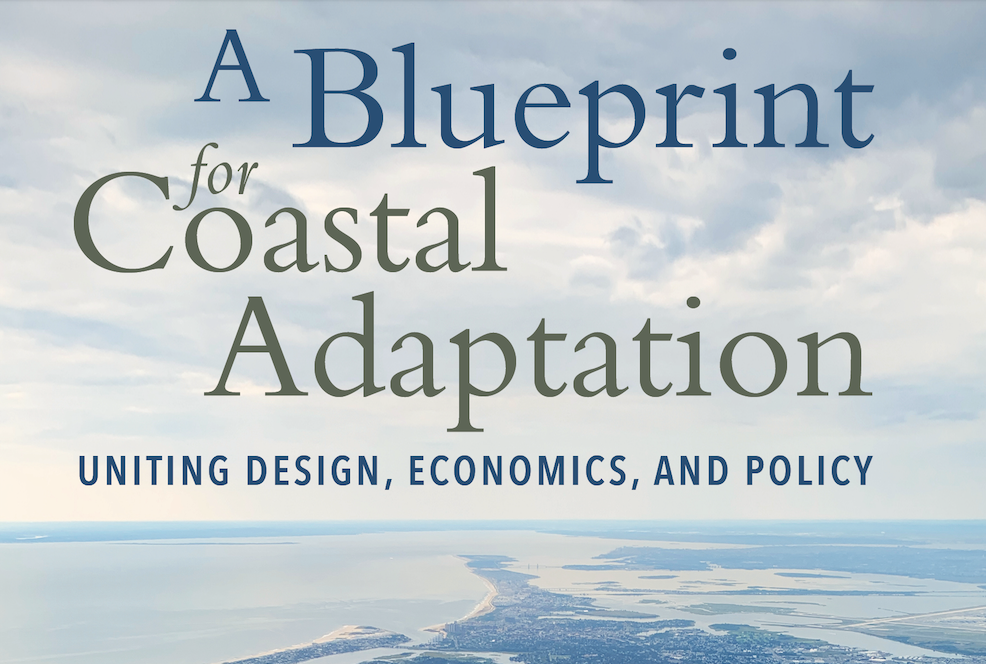 An Excerpt from “A Blueprint for Coastal Adaption”

Enjoy this excerpt of A Blueprint for Coastal Adaptation: Uniting Design, Economics, and Policy generously provided by Island Press, a media sponsor for the Waterfront Conference. If you enjoy this article, be sure to join one of the book’s editors Billy Fleming for the “Flood Control and Resilience in Our Region: Funding and Leadership” panel discussion at the Waterfront Conference on May 10. View the conference agenda and register here. As well, you may purchase a copy of the book here and use the code WATERFRONT25 for 25% off at check out.

A Blueprint for Coastal Adaptation: Uniting Design, Economics, and Policy

Chapter 6: Public Funding of Coastal Adaptation: A Review of US Public Sources—and the Case for More

“There are many reasons to support the need for the political backing and programmatic expansion of public funding for coastal adaptation, particularly at the federal level. First, public funding and finance are well-known and proven vehicles to pay for infrastructure. Public funds and bond finance have been a stable component of US financial markets for centuries.

Second, coastal adaptation—in capital projects, operations and maintenance, and non-built services—costs a lot. The sheer magnitude of the public sector’s funding capacity sizes up more strongly against future adaptation costs as compared to private- and civil-sector investment. Public investments in adaptation have likely midterm employment and productivity benefits beyond the purposeful improvements in adaptive capacity itself. While private and philanthropic finance can supplement public funding, they should never be interpreted as substitutes. Rather, public funding typically attracts other capital, whether philanthropic or private.1

Third, unlike private funding, publicly supported infrastructure provides a range of public benefits. Its funding and financing practices do not have to painstakingly monetize all potential benefits to maximize investment returns within a short time. The maximization of co-benefits is often code for increasing returns to private investment—rather than improving the lives and livelihoods of residents and communities who benefit from adaptation infrastructure. Public funding renders the quest to monetize intangible benefits like building social capital or mitigating the trauma of coastal inundation moot; the aggregation of public benefits for community and regional commons—and common goods—that derive from adaptation infrastructure’s averted losses warrants a communal investment bucket.

In the cacophony of calls for innovative private finance and charitable impact investment for climate adaptation and related environmental hazards, public funding is dismissed as unfeasible in an era of selective austerity—though the politics behind that diminution are rarely questioned. Though perceived as bureaucratic and complex, traditional public funds and financing vehicles are not only better equipped to handle the scale of coastal adaptation demands but can also be harnessed to better allocate beneficiaries and their respective shares of the costs of adaptation. For all of these reasons, this chapter explores the potential for expanding public funding and finance for the purposes of coastal adaptation.

One reason that adaptation funding and finance is such a heated and timely topic is because the costs of coastal adaptation along with other climate adaptation efforts are expected to be so high.2 Seeking to define the magnitude of this infrastructure bill has been an increasing quest for local and national governments as well as global multilateral organizations over the last decade. Yet, the estimate of infrastructure costs has been challenging to calculate for numerous reasons, not the least of which is that infrastructure “green lights” are contingent on all of the following: changing political priorities; evolving and increasingly onerous climate change effects and commensurate infrastructure loads; competing and possibly preferable policy options (such as retreat or relocation); highly varying differences between projected costs of adaptation infrastructure types and their local monetized benefits; the dynamic state of extant infrastructure and settlement conditions; alternating discount rates for sketching out projects’ feasibility; the rising costs of financing in lower-capacity jurisdictions that are most at risk; and local prices for land, labor, and materials.

Despite these challenges, dedicated resources must be developed for new and maintained infrastructure. Yet, the magnitude of need is expanding due to the persistent gaps in infrastructure investment in the developing world and in the lower-income communities of the developed.3 The earliest estimates of global adaptation costs ranged widely and wildly: from $22 to $105 billion annually for infrastructure in developed countries alone.4

Estimates have since evolved—and grown—to cover more climate scenarios and national contexts.5  Annual adaptation costs of $140 to $300 billion by 2030, and from $280 to $500 billion by 2050, are projected.6 The most recent global estimate puts the price tag at $180 billion annually.7 The proportional costs for developed nations are likely higher than their developing counterparts, as seen in European projections.8 The costs, further, will also increase as no or minimal action is taken to mitigate climate change.

Despite global calls and pledges to fill these widening needs over the last decade—and despite challenges in identifying and categorizing allocations—actual global adaptation finance is still a pittance.9 Estimates have been in the $20 to $30 billion-per-year range for the last seven years for adaptation-related infrastructure supported by development finance institutions or national and local governments.10 The global Adaptation Fund alone maintains a current fund balance of about $540 million.11 Of the $30 billion pot, less than $1 billion is identifiable as directly associated with coastal protections.12

Even in advanced economies like the United States in which adaptation infrastructure could theoretically be disaggregated from the fundamental “baseline” infrastructure investments that currently exist, these numbers are still best guesses.13 Although nation-specific adaptation need estimates would theoretically be more accurate, there have been few such estimates. In the United States, for example, the state of the field is hampered both by methodological limitations as well as likely political reticence to conduct a nationwide assessment. Consequently, few federal agencies have projected national costs to adapt in their respective charges and, in turn, requested budget appropriations to fund those needs.14 Regardless, early scholarship projects larger costs for the country than the global aggregate estimates imply.15 Adaptation costs are massive just for individual geographies such as coastlines (estimated $400 billion cumulatively through 2040) or sectors such as the water supply ($944 billion cumulatively) or road networks ($785 billion cumulatively).16

State and local governments are overwhelmed by these national figures.17 Consequently, a growing body of work assesses local climate effects and specific infrastructure design and construction project options to provide pictures of the local costs—and likely public funding needs. These more detailed and practice-based cost estimates, though, are just as daunting.18 For example, a study on the projects proposed in Boston’s climate resilience plan estimates $1 billion to $2.4 billion in short- to midterm costs.19

In fact, the overall current costs and cost gaps for designing, building, maintaining, and retrofitting infrastructure of all kinds (adaptive and otherwise) are important proxies for gauging the costs of coastal adaptation infrastructure. Economic estimates from the most recent American Society of Civil Engineers (ASCE) well-publicized infrastructure report card put the current funding needs at over $3.3 trillion by 2025 and almost $10.8 trillion by 2040 at current investment rates. These estimates do not necessarily account for the effects of future climate change and, therefore, could be potentially even larger.20

Most of the infrastructure projects and specifications accounted for in this price tag are not directly relevant to coastal adaptation. Yet, this far-reaching projection of infrastructure costs reminds us of two important lessons. The first is the massive scale of funding needed even for the fraction of national public works that is relevant for adaptation purposes: determining the exact measurement of that scale may be less urgent than identifying what needs to get built or rebuilt in relation to other policy options, how to build it equitably and sensitively, and how to pay for it.21

The second lesson comes from the often-overlooked detail in these cost projections: that funding and financing mechanisms are currently footing a significant portion, if not majority, of the bill. The same economic analysis of the ASCE scorecard notes that almost $1.9 trillion and over $5.6 trillion are currently funded or expected to be funded, respectively, for the 2025- and 2040-time frames. Understanding how infrastructure gets and has gotten funded historically is critical to imagining who pays for it in the future.”

Fankhauser, Chris Hope, Sari Kovats, et al. Assessing the Costs of Adaptation to Climate Change: A Review of the UNFCCC and Other Recent Estimates (London: International Institute for Environment and Development, 2009); Agrawala Shardul

Costs of Adapting Infrastructure to Climate Change,” in Parry et al., Assessing the

estimated to be diverted to water and wastewater management adaptation, $7 billion to disaster risk management, and $2 billion to infrastructure and other built

Under Way to Assess Water Infrastructure Vulnerabilities and Address Adaptation

James E. Neumann, “Assessment of Climate Change Adaptation Costs for the US

Centre for Climate Change Economics and Policy Working Paper No. 287,

Grantham Research Institute on Climate Change and the Environment Working